My Painting 'Sojourning #11' was included in this show at WSU Shiftspace Gallery for Wichita's Final Friday event in January. 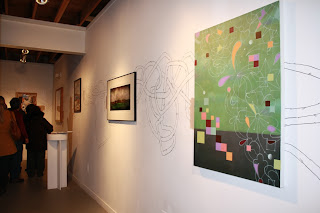 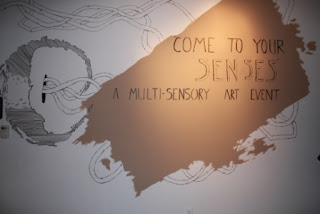 Wall art by Keegan Rogers
WSU Shiftspace Gallery is usually for showcasing WSU students' works, but this time, it was open to artists working in the community.  The show included 'multi-sensory' works such as 2D and 3D visual works, performance, poetry reading, video, technologies, tasting cuisine, electronica, etc.
Shiftspace Gallery has made a big makeover with the curved wall dividing the space for this show and I think this partition will enable showing more WSU students' works in the future exhibitions as well. 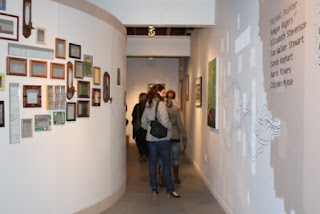 Mirror installation by Seth Blume on the left
Individual works were connected by the wall drawing by Keegan Rogers which gave a sense of inviting, and unity to the show as a whole.  In front of my painting, across the walk way, a mirror installation by Seth Blume was installed.  The reflection of the mirrors with geometric square and rectangular shapes was on the wall before my painting and the fragmented images of my painting with geometric shapes were in the mirrors, which I found amusing and interactive to each other. 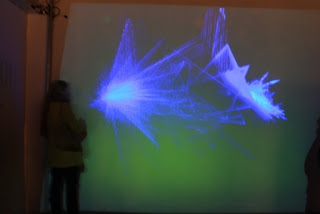 Well, I needed to practice uploading videos to YouTube, so I made this video for my first trial.
This video is made with a series of photos that I took when I participated in an artists' residency program in Umbria, Italy, in 2009.  They are a little bit old, but very memorable for me.  I spent a couple of days in London before Italy and I took these photos from a window of an airplane from London to Rome.
Above Europe - From England to Italy
The weather was very good and I was so excited to see the aerial views of Europe clearly as if I was looking at a map and it was totally unexpected.  Seven Sisters, the group of chalk cliffs in Southern England, is one of my favorite places in England.  I have been to this place several times, but this was the first time to see it from above.  It was breathtakingly beautiful.  The English channel was narrower than I had thought.  Soon after we left England, the French coast began to appear on the right.  The city of Paris was easy to recognize with its size and the all the roads radiating out from the Arch of Triumph.  I was surprised that the snow capped tops of the Alps looked very close from the window. When my final destination, warm Italy, appeared, my heart was filled with excitement.  I wish I had more shots, but I did not think about making a video like this at the time, but still I hope people can feel the flow of the flight.
The music is called 'Softly She Departs' by Paul Mottram.  It is from the list of YouTube's free music, so I think it is OK to use it.  It is kind of somber...  I chose this piece first, from its impression and its length and of course the title.  I don't know what the lyric writer meant with this title.  It could be death or a broken heart.  But I did not mean those things for this video.  I simply wanted to mean departure from one place.  Traveling in Europe reminds me strongly that I am a sojourner.  Even if I have a longing to stay in the place where I love, I cannot stay there forever.  A sojourner's life is like a traveler's.  I am just passing through.  It is kind of sad, but because of that, I treasure every single moment of being there.  I was thinking that kind of thing when I was looking at these aerial views.
Posted by Chiyoko Myose at 3:06 PM

My painting is included in this show.

"Collectivity
Come to your Senses - A Multi-Sensory Art Event"

Chiyoko Myose
I am a Japanese artist based in Wichita, Kansas. My works are primarily painting and installation art. Please check out my website for more information. http://chiyokomyose.com Instagram: chiyokomyoseart